There are few sports as nail-biting as soccer and few events excite fans
more than the World Cup. Now that all the hoopla during the games have faded in intensity, its worth having a look at the less than shiny aspects of it all. 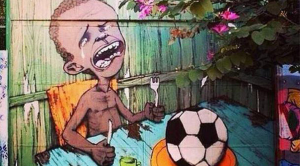 The ‘beautiful game’ has seldom been so
beautiful off the playing field with riots, hooliganism, nationalistic
hatreds and racism all becoming features of soccer at various times. All
too often, soccer has become something to be feared rather than enjoyed by
many people unfortunate enough to live near soccer stadiums. Though no
longer as prevalent in recent years, the English Premier Football League
had become almost as well known for the rioting between rival football
clubs as the games themselves. Considering the billions of dollars
involved in that League, there’s more than just pride at stake.

When it comes to the Soccer World Cup there’s both national pride and
money at stake: a poisonous combination at the best of times. With
sponsorship deals, lucrative building contracts and broadcasting rights
being competed for, the World Cup is not so much about the games
themselves as the dirty deals and money changing hands behind the scenes.

In order to make the Soccer World Cup the spectacle that it is, a lot of
preparatory work is usually required. Stadiums, accomodation for players
and various officials, transportation networks to and from the various
stadiums and other facilities need to be made available. In the short
term, this means plenty of work for the locals as they try to get
everything ready for the World Cup – right?

It has already been revealed by the International Labour Organisation and
the BBC that the majority of workers being employed to build the
facilities for Qatar’s World Cup are labourers from overseas who endure
appalling working conditions and very poor pay. This has not been the
exception but the rule with most Soccer World Cups, including Brazil.

But it isn’t just in employment that local people have been shafted.
One of the little known aspects of Brazil’s World Cup is that thousands
have been forcibly evicted from their homes as they have been demolished
to make way for the various stadiums and other facilities. Huffington
Post reported that 15,000 people were evicted in Rio de Janeiro alone.
The cost of building the stadiums and facilities is estimated to have been
around $11.5 billion – of which $3.6 billion has come from Brazilian
taxpayers – and has come at the expense of essential services such as
education, health and social services which are desperately needed far
more than stadiums. What is particularly galling is the fact at least
four of the twelve stadiums built, weren’t even needed. Most of them will
never be filled to capacity again because they have been built in places
that don’t have the population base to fill them, assuming they could
afford the ticket prices in the first place.

Which is part of the problem.

Not only was the majority of Brazil’s soccer-mad population unable to
afford tickets to attend the World Cup games but now the games are over
they will be stuck with the cost of maintaining these facilities without
the benefit of being able to use them.

None of these problems went unnoticed in the mainstream media. Questions
were raised from the moment of the announcement that Brazil had won the
2014 World Cup contract, as to whether promises could be delivered. Only
later did it transpire that FIFA, the money grubbing Mafia that controls
international soccer, had been lavished with dinners, gifts, money and a
presentation by Brazilian officials to get the games awarded to them.

While the government heralded the awarding of the 2014 World Cup as a
great victory for the country as a whole, it was obvious to most of the
population that this was not a victory for them. A recent Pew Research
Centre survey revealed 61% of the Brazilians who responded believed Brazil
was a bad place to host the games primarily because the country could not
afford it. In a nation where the average monthly income is $680 and the
majority of people live at or below the poverty line, the last thing they
needed was to see money squandered on an international competition that
was desperately needed for other things.

It was primarily these immediate concerns that triggered the protests and
riots that swept many parts of Brazil over the last year or so but, as is
often the case, there were also many underlying issues. In particular,
the cost of transportation and other essential services were increased to
a level that was in danger of preventing millions of workers from getting
to their jobs and making what is already a squalid standard of living even
worse. Much of these price increases were intended to pay for the
transportation and other needs of those attending the World Cup rather
than for locals.

As for the matches themselves the cruellest twist of the knife was
delivered by Germany who knocked Brazil out of the World Cup in the
quarter finals by 7 – 1. Almost immediately, angry and bitterly
disappointed fans began burning the Brazilian flag and rioting broke out
in parts of the country. It cannot be denied that this is an example of
the way in which there has been a mix of motivations behind the street
actions that have taken place, not all of them entirely supportable for
those with radical politics. Though it also shows the way nationalism can
backfire on the elite when things don’t go according to plan.

In one sense the up side to the failure of the Brazilians to win the World
Cup is that the government can’t gloss over the gross inequalities and the
major disruptions caused by the tournament, with victory celebrations.
The big question now is who is going to foot the estimated $250,000 a
month required to maintain each one of the stadiums that have been built?
How is the money going to be recovered to pay for the World Cup,
considering the prices of iron ore and oil exports that Brazil was
expecting to use to recuperate the costs have fallen in recent months?

Even in countries that are quite prosperous, the hosting of a major
sporting event has been a huge drain on their economies. Many cities have
become heavily indebted as few, if any, of the supposed economic benefits
of hosting events like the Olympic or Commonwealth Games or the Soccer
World Cup have materialised. Most of the money generated by such events
has poured into the coffers of the media broadcasters and corporations
with their sponsorship deals and the construction firms with their
lucrative building contracts and the pockets of various government and
FIFA officials. Local smaller businesses are often banned from operating
in or near stadiums unless they pay exorbitant fees and levies, so they
gain few benefits from the money spent by the visitors to these events.

However, the issues brought out into the open by the World Cup were not
purely the result of it. Most of the many social and economic problems
that plague Brazil have been around for decades and have largely been
swept under the carpet by the succession of dictators and elected elitists
that have dominated politics. The World Cup enabled the many social ills
to reach both the Brazilian ruling class and the world as a whole because
of the large contingent of media that has come with the World
Cup.Nevertheless, simply highlighting them doesn’t solve these issues.

In recent years there has been a growing backlash against the sporting
elites around the world having their hands out for public funds, in return
for highly dubious economic benefits of competing or winning sporting
trophies. Here in Aotearoa, questions are being raised about the
allocating of taxpayer dollars to Team New Zealand to mount a challenge
for the next America’s Cup yachting competition. No doubt, similar
questions are being raised in Glasgow in regards to the Commonwealth
Games.

Yes, soccer is the beautiful game but what goes on behind the scenes is
anything but beautiful: a lesson being learned the hard way in Brazil and
Qatar. FIFA is also starting to feel the backlash from a soccer-loving
public that is growing tired of the prevalent cronyism, corruption and
dirty deals that now dominate soccer worldwide and which were brought
home so brutally during the 2014 World Cup.