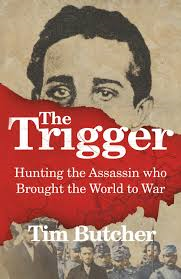 2014 is the centenary of the outbreak of WorId War 1. In New Zealand “World War I” means Gallipoli and the Western Front. That’s where most of the ANZACs spent their time so that has become the area of interest in this part of the world. It’s understandable that this has happened but it means other aspects of the war are less known or understood. For example, how did it start? According to Baldrick in Blackadder “I heard that it started when a bloke called Archie Duke shot an ostrich ‘cause he was hungry”. Nice try, but a bit wrong. In truth, the assassin was Gavrilo Princip, part of a group of Bosnian nationalists who shot Arch-Duke Franz Ferdinand of Austro-Hungary when visiting his empire’s outpost in Sarajevo. With millions of people across whole continents having died or been wounded, very little attention has been paid to Princip as an individual. Who was he and what motivated him?

Journalist Tim Butcher sets out to answer these questions. Butcher tries to literally follow in the footsteps of Princip from his home in the back of beyond (apparently the equivalent expression in the local language translates colourfully as ‘where the wolves fuck’) to the street corner in Sarajevo where he did the deed. This in itself could be quite interesting, but what gives the experience extra depth and resonance is that Butcher covered the war in Bosnia during the 90s and therefore in the course of his journey revisits places with multiple layers of personal and historical significance.

A lot of professional historians have been glib in their understanding of Princip, seeing him as a cypher for bigger forces and they have often merely repeated what their predecessors, colleagues or the Austro-Hungarian prosecutors at Princip’s trial have said.The author’s on-the-ground research managed to turn up stuff that had previously been ignored or overlooked. For example, there is a famous photo of police dragging away a man moments after the assassination. In nearly all accounts (ironically including some reviews of Butcher’s book!) the photo is said to be of Princip. However, the writer establishes that it is actually Ferdinand Behr, an innocent bystander later released by the cops. 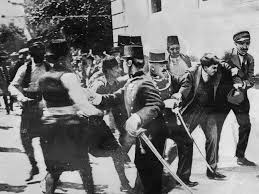 Butcher also manages to find Princip’s school reports and reliable accounts of what the teenager got up to. The view that emerges is one of a quiet, intelligent and somewhat idealistic youth from an impoverished background. He had a strong sense of justice at an early age and grew to be a wilful but academically accomplished (for his time and place) teenager. Princip read works by the utopian socialist William Morris and the Russian anarchist Kropotkin as well as soaking in ideas of national liberation. As regards the latter, the author makes it clear that his subject’s nationalism was of an ecumenical, inclusive sort that desired freedom for all south Slavs. He worked with Croats and Bosnian Muslims in order to achieve his goal of ending what Princip saw as the foreign occupation by Austria. It had little to do with the kind of fanatically sectional, extremist and genocidal form that took hold of the country in the 1990’s. Butcher suggests this is perhaps part of the reason Princip is little known even in his own country.

Despite his reading interests, Princip was not an anarchist and Butcher does not write from a radical perspective. The book is well worth reading however. Firstly because it’s intrinsically worth knowing who lay behind the immediate trigger that lead to the war that killed so many workers in uniform. Secondly, the writer makes a good case for demarcating and separating Princip’s form of inclusive nationalism in 1914 from Tito’s maverick Yugoslav ‘Communism’ of the 40s-80s and Milosevic’s exterminationist version of the 90’s, but misses the fundamental ideological continuities that have persisted on a substrate level. If the example of Bosnia teaches us anything, it is that nationalism in the modern age is a universal dead end when it comes to real progress for humanity.

Nationalism sets up a mythos built on lies of exclusivity. It divides people along often artificial divisions of geography, religion and the slippery concept of ‘culture’ and allows elites to emerge. These rulers encourage the population to see others as different and potentially a threat to those on ‘our side’ of the mountain range, region or hemisphere. At its rare best it gives people a sense of identity while causing discrimination and tension. If anyone isn’t sure how to answer the age old question of ‘who benefits?’ from such a way of operating, consider the fact that when Butcher was able to trace Princip’s descendants he found they are almost as poor today as the family was 100 years ago! At the other end of the scale, you find fratricidal civil wars with lingering effects. When the journalist returned to the area, he joined in an Annual Peace March marking the massacre of Srebrenica and learned there are still hundreds of bodies being discovered. Worse still, well-meaning young assassins looking for national liberation can spark a conflagration that can lead to numerous countries sending millions of other young people to die for ‘the nation’.