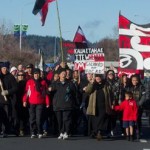 Capitalism is the economic system that prevails globally. One of the main characteristics of this system is the pursuit of profit by a minority and the ‘development’ of infrastructure for this purpose, above the needs or wants of the people at large. It’s true that the process varies slightly from place-to-place in the way it’s implemented. In some locations the powers-that-be can literally bulldozer their way over opposition. In others, the population manages to organize to oppose these changes.

A current example of this tension between people and profit can be found in the Rotorua area. The construction of an Eastern Arterial highway is being proposed. The route will be between Sala St in the east of the city and the airport, which is expected to cost in excess of $100million and is scheduled for completion sometime between 2020-2025. This proposal has met with strong opposition from local hapu, the most recent manifestation being the hundreds strong protest hikoi on 24th June, which marched to the council building. Upon reaching the meeting and following formalities, the Mayor Kevin Winters voiced his sympathy for the protestors but stressed that the council saw itself as “the meat in the sandwich” and that it was the NZ Transport Authority which is ultimately responsible for the project. The protestors dispersed peacefully but there can be no doubt this is only an early skirmish in what is to be an ongoing struggle.

That is a basic outline of recent events, but what motivates those involved? Firstly, the NZ Transport Authority makes clear on its website that “One of our key goals is to support economic growth and productivity throughout New Zealand.” and the proposed arterial route is undoubtedly designed with that imperative in mind. There is some acknowledgement that the route will impact on residents but this is characterized as a ‘challenge’ rather than a red light or indication that priorities are fundamentally wrong. As for the Mayoral claims that he is in sync with the protestors, it is noteworthy that the NZTA says it is “…working closely with Rotorua District Council on this project”. Either the Mayor simply doesn’t carry much weight with the NZTA or he realizes with an impending election he can’t be seen to be inattentive to what the pesky voters want. Given that in his 2013 campaign literature he has listed his top issue as “Economic development to achieve economic growth by Rotorua District Council facilitating more Public Private Partnerships (PPPs) and or Joint Ventures (JV) with developers and stakeholders”, there can be little doubt about the reality of where Winter’s underlying sympathies are.

Ranged against the NZTA are members of the Te Arawa hapu Ngati Hurunga Te Rangi, Ngati Te Roro o Te Rangi and Ngati Uenukukopako and other concerned members of the public who have organized under the banner of The Positive Rotorua Environmental Society. The hapu note that the construction of the Eastern Arterial will have devastating cultural and material effects on those in its path. For example, one affected resident is Irihaapeti Hona Wineera who bathes daily in ancestral hot pools that will be lost if the construction takes place. She points out: “Our Iwi have gifted heaps of land for the betterment of Rotorua. Half of Rotorua is owned by us and what is left is just a small portion and they want that as well. What is going to happen to us as people?” This concern is echoed by Hinemoa Ngaati whose whenua is near Lake Rotorua “What are we left with? We live in a rural area. It’s going to change. It’s going to be highway through here…all our bird life is going to be gone…it’s going to be taken over by the noise and pollution. Oh, I can’t understand it.” Another commentator among those affected is kaumatua Parone Pirika of Ngati Uenukukopako who has said “When our land is stolen, our spirit is damaged. The impact of this on our future generations is devastating. It’s happened to us before when our land was stolen to build an airport. The law was used to deprive us. Thank you for listening to our plight and for allowing me to share this story with you, so we may stop the continual theft of our lands.”

Clearly there is a clash of values between a system that prioritizes profit and industrial growth for the sake of a few and those who see an inherent value in the land in and for itself rather than as a thing to be endlessly exploited. There are powerful interests behind the roading project and on the face of it, those potentially staring down the face of the bulldozers have the odds stacked against them. However, this project is in its early stages and with possibly a decade of struggle ahead, there is time for those in opposition to it to build a combination of strategies that just might derail it. Watch this space! 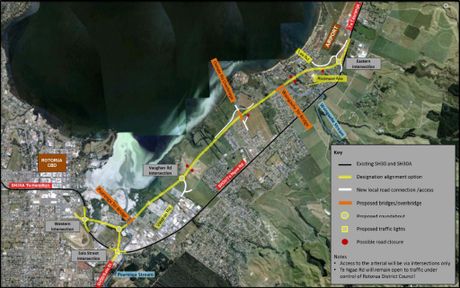 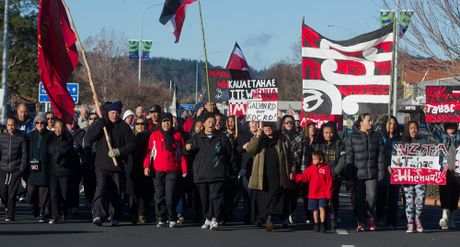