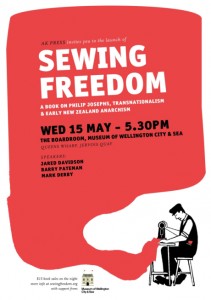 Jared Davidson, AK Press, and the Museum of Wellington City & Sea invite you to the launch of Sewing Freedom, a new book on early anarchism and labour history in New Zealand.

“Sewing Freedom works on several levels. It is a meticulous biography, a portrait of an era, a sophisticated discussion of anarchist philosophy and activism, and an evocation of radical lives and ideas in their context. Davidson has designed a fresh, crisp book with visual impact, nicely enhanced by Alec Icky Dunn’s wonderful sketches… This beautifully-executed book tells an important story in New Zealand’s political history.” – Chris Brickell, Associate Professor of Gender Studies at Otago University and author of Mates and Lovers

WHERE: The Boardroom, Museum of Wellington City & Sea, Queens Wharf, Jervois Quay, Wellington
ABOUT THE BOOK:

Sewing Freedom is the first in-depth study of anarchism in New Zealand during the turbulent years of the early 20th century—a time of wildcat strikes, industrial warfare and a radical working class counter-culture. Interweaving biography, cultural history and an array of archival sources, this engaging account unravels the anarchist-cum-bomber stereotype by piecing together the life of Philip Josephs—a Latvian-born Jewish tailor, anti-militarist and founder of the Wellington Freedom Group. Anarchists like Josephs not only existed in the ‘Workingman’s Paradise’ that was New Zealand, but were a lively part of its labour movement and the class struggle that swept through the country, imparting uncredited influence and ideas. Sewing Freedom places this neglected movement within the global anarchist upsurge, and unearths the colourful activities of New Zealand’s most radical advocates for social and economic change.

More information on the book, a sampler, and reviews, can be found at www.sewingfreedom.org

Books will be on sale for $15 cash on the night. Free entry. Nibbles and drinks provided.

Jared Davidson is an archivist at Archives New Zealand, a member of the Labour History Project, and author of Sewing Freedom. His first book, Remains to be Seen: Tracing Joe Hill’s Ashes in New Zealand, was published in 2011.

Barry Pateman is an anarchist historian, Kate Sharpley Library archivist, and Associate Editor of The Emma Goldman Papers (USA). A prolific editor and writer, he has been involved in a number of projects and publications, including Chomsky on Anarchism, A History of the French Anarchist Movement, Emma Goldman: A Documentary History of the American Years, and Anarchist Voices: An Oral History of Anarchism in America.

Mark Derby is the Chair of the Labour History Project and an extensively-published writer and historian, having worked for the Waitangi Tribunal; the PSA; Te Ara, the online encyclopedia of New Zealand; and as South Pacific correspondent for Journal Expresso, Portugal’s leading newspaper. His books include The Prophet and the Policeman: The story of Rua Kenana and John Cullen, and Kiwi Companeros, on New Zealand and the Spanish Civil War.