An injury to One Is An Injury to All 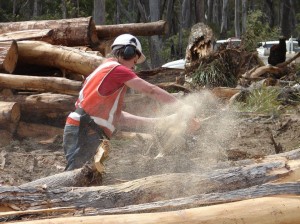 Brainstorm a list of dangerous jobs and it would have to include those in the forestry sector. It is not hard to imagine how working long hours in all weather conditions with heavy equipment and physically demanding tasks, can take their toll on those in the industry. Prolonged employment can lead to RSI, back strain and hearing loss and that’s just when performing the work without mishaps. This doesn’t take into account the more extreme end of the spectrum, with death a genuine possibility. This is not an exaggeration, with statistics showing reality is every bit as bad as perception. Sixty-seven forestry workers have died in work related accidents since 2000, with 33 deaths and 874 injuries since 2008. There have been four fatalities this year so far. To give some comparative meaning to this, the death rate in the UK forestry industry for example, is 10.4 per 100,000 workers and in NZ a staggering 343 per 100,000 !

The current government has given some appearance of dealing with the situation, following outside pressure to deal with the rate of accidents and fatalities. Predictably, the National Party coalition have done the bare minimum to improve conditions.The Labour Minister Simon Bridges says a code of practice introduced last year, combined with a new work safety agency called WorkSafe New Zealand, which is likely to be established in December, are sufficient remedies. Bridge’s was quoted by NZ Newswire as saying the code “…hasn’t been there long, if it’s put into practice that will solve these issues”. However, the code in its current shape suffers from dangerous weaknesses. For example it doesn’t mandate a maximum number of work hours or breaks between shifts. In a form of employment where physical tiredness can lead to life-threatening mistakes, this is hardly a good argument for accepting the status quo. The code also locks workers within the system that is the cause of their problems. It does this by potentially laying the blame on their shoulders for accidents, due to failures in adhering to the code.

The dangerous conditions for forestry workers should be put in the wider context of changes to the employment laws over the past 30 years. The majority of forestry workers are contractors working long hours. This low rate of union coverage has allowed the bosses to shape the working environment on their own terms. It has meant the workforce is in a position of just putting food on the table and bare survival, with any resistance being defensive and limited. This trend is likely to worsen with new legislation currently working its way through parliament. For example, the Employment Relations Act Amendment Bill will mean that unions have to give advance notice of industrial action. In addition, anything short of an all-out strike can be deemed a ‘partial strike’. This means bosses can clawback or deduct a portion of a workers pay packet to cover any such activity. Importantly for forestry workers and others in physically dangerous occupations, the bill would also remove the right to any breaks at all. That would obviously nullify any element in the current code of practice, mentioned above. Another piece of legalised class war before parliament at the moment is the Employment Relations (Continuity of Labour) Amendment Bill. This bill will allow bosses to bring in scab labour during strikes, to undermine workers solidarity. In unison, these laws when passed are going to be powerful weapons the bosses can use to try and enforce their will over the workers, not just in one industrial sector, but across the board.

What response can be made to help forestry workers? The Green and Labour Parties and the Council of Trade Unions are calling for an inquiry into the industry. When matters of life and death are concerned, it would be petty to dismiss out of hand the idea of something that will help the situation. If an inquiry was genuinely independent of domination by the bosses and lead to some positive reforms, it should be welcomed. It remains to be seen whether any inquiry would honestly take such a form though.

On their part The New Zealand Forestry Owners Association emphasises that the forestry sector exports $3.3 billion worth of products, making its share of the economy around 11.1% of the total and therefore the third largest sector of the economy. Their primary concerns are economic and profit driven. Of course not every forestry boss is a heartless chupacabra with dripping bloody fangs. Even so, this isn’t a question of a few bad elements that can be removed or a couple of minor tweaks to the system. With savage new labour laws in the offing and the economy structured within a framework that values profit and control above the welfare of those in front of the trees, the overwhelming pressure is to produce, rather than a focus on staying alive.

A fundamental shift in priorities is required and this just can’t be achieved within the existing system, despite whatever minor improvements can be made here and there. Workers within the forestry sector need to build what links they can both with each other and with those outside it, here and internationally. Values such as a recognition that ‘An injury to one, is an injury to all’, that workers can’t rely on the ballot box to help them, that officially approved methods of fighting the bosses are (literally!) a dead end and that we all face the same enemy, need to be revived. As difficult as it will be to obtain, the best long-term option for the safety of those in the forestry industry is for those in that industry and the community as a whole, to control it in their own interests. Workers don’t need to die, capitalism does.