“No Blood for Water”? 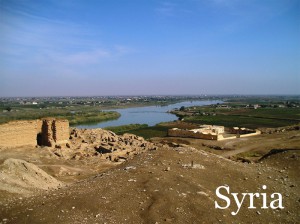 The Syrian Civil War and Its Possible Consequences

Since 1975 most of the major military conflicts – Lebanon, Bosnia-Herzegovina, Afghanistan and Libya – have been civil wars. Regional or super powers have intervened supposedly to save lives and resolve each conflict. They supposedly try to do this by removing the “bad guys” but have ended up leaving the country they came in to ‘save’, an even bigger mess than it was before they intervened. Often, this is because the intervention is driven by profit or a power obsessed ideology, rather than any understanding of the real situation.

In Vietnam the conflict was not just about the imperialists/capitalists on one side and the communists on the other. It was also a war between the people who lived in the highlands and those who lived in the lowlands, a war between the Catholic minority that dominated political life in South Vietnam and the Buddhist majority and a war between a Soviet-backed elite in Hanoi and a U.S-backed elite in Saigon (today Ho Chi Minh City). Only the ideologues on both sides believed it was a war of freedom or liberation. For most people it was a pointless and incredibly expensive bloodbath that left millions of Vietnamese civilians dead and deadly ordinance lying around everywhere, which still kills hundreds of people every year.

The war in Afghanistan in the 1980s was also portrayed in a breathtakingly simplistic manner by both its supporters, who painted it as a war against communist tyranny and liberation, and one waged over gas and oil by its opponents. It was actually more a civil war between tribal groups, warlords and a puppet government backed by the Soviet Union. It was also an ethnic and sectarian conflict. In what would later rebound badly, the United States backed the Muhajadeen’s war against the communists. The superpower did this by using the Muhajadeen’s Islamic religion as a motivator to encourage a fight against the infidels in the country. The Muhajadeen not only slaughtered the more moderate elements of Afghan society but once the Soviets were gone, they imposed a theocratic regime that was far worse than anything done by the Soviet Union.

Cue forward twenty years and the United States has found itself bogged down fighting the children of those Muhajadeen fighters they trained to fight the Soviets in the 1980s. In response, the same tiresome slogans have been trotted out by liberals and elements on the Left, while the supporters of the war claim it’s a war against the bogeyman of terrorism. This is done even though none involved in the terror attack used to justify the invasion of Afghanistan – the 9/11 attacks – were Afghan nationals. Most of those involved in the attacks were from Saudi Arabia, Egypt and Pakistan.

The war in Iraq has also been fought with almost identical slogans to those applied to Afghanistan. This sloganising forgets that the war was never just about oil or Iraqi resources. That conflict was also based on a personel vendetta on the part of George W. Bush, who lied about why the United States and its ‘coalition of the willing’ invaded Iraq. There’s no denying that Saddam Hussein was a tyrant who needed to go, but the agent of that change was a superpower with its own interests. Iraq itself was a creation of big power manoeuvring in the early 20th century, not an organically unified entity. The only thing that kept Iraq in one piece, had been the fear of Saddam Hussein. Once he was gone, the country quickly descended into civil war, as old sectarian and ethnic hatreds resurfaced.

And now we have the conflict in Syria raging unabated. Until recently, the Western states chose to sit back and do nothing while the regime of Bashar al-Assad massacred thousands of peaceful protesters. The Western rulers only decided to get involved when the calls to do something grew so loud, even they could not ignore them. The greatest of ironies is that, thanks to the extreme over-reaction of the Assad regime to the moderates, Islamic jihadists have flocked to Syria to wage what they regard as a holy war against a perceived infidel regime. They are now in the process of being armed by the Western governments, which have been waging war against these very extremists in Afghanistan and Iraq.

The civil war in Syria isn’t simple, but if we try to sum it up we can say it is essentially a throwback to Cold War politics. On the one hand, there is the government of Bashir al-Assad, who took over the country in what amounted to a dynastic succession from his father. He is backed by the Russians and many Syrians, particularly from religious minorities such as the Christians, who fear that if the rebels win they will persecute them. On the other side, there are the rebels who range from reformist bourgeoisie right through to extremist Islamic jihadists who have conflicting objectives.

The rebels in Syria are mostly backed by countries like Saudi Arabia, Qatar and Turkey – primarily American clientèle states with Islamic governments. They have established a government-in-exile in Qatar. This cabal of wannabe rulers call themselves the Free Syrian Government (FSG), although its members appear more interested in fighting among themselves than actually governing anything. The FSG has largely lost control of the situation in Syria, as the jihadists move in and impose Islamic religious law in many of the areas they have “liberated”.

What makes the conflict even more complex, has been the role of the Israeli state. It has carried out air strikes against the Syrian government in Damascus and fought clashes with Syrian forces along the Golan Heights. The Golan was Syrian territory until Israel seized it in the 1967 Six Day War. Like Jordan, the one thing the Israeli state does not want is an Islamic state on its borders. They especially don’t want one that might take it upon itself to launch a holy war against Israel. Already, the Assad regime has used Israeli air strikes to try and win favour with Russia.

The problem for the opponents of Assad is there is an element of truth to his claims of Israeli interference and the Russians have more to lose if he is right, than anyone else. In the greater geo-political picture, Syria is the only Cold War ally the Russians have left in the Middle East and Africa. They also have restless Muslim populations in regions like Dagestan and Chechnya. If Syria falls to the rebels, the Russians will lose virtually all their influence in the Middle East. They will be surrounded by states that are either pro-American (reluctantly or otherwise) or decidedly dodgy Islamic states that are likely to stir up further troubles among the Muslim populations within Russia’s borders. That is the key reason why Russia continues to veto any resolutions in the United Nations against Syria.

As for the United States and the Western imperialists, they have a major problem: thousands of American, British and other Western soldiers have been killed fighting Islamic extremists. It isn’t going to go down too well with large sections of the population ‘at home’, to discover their governments are now going to be providing weapons for Syrian rebels that are increasingly made up of local and foreign Islamic extremists. It’s also difficult for the Western governments to prance around the world proclaiming they are defending democracy and freedom, while giving money and weapons to groups that intend to impose an Islamic theocracy upon the people of Syria.

Increasingly, it looks as if the Syrian people are going to come out on the losing end. Given a choice between a dictatorship that has no qualms about using artillery and aircraft against their own people and rebels that seek to impose an Islamic regime that will be worse than anything Assad could ever dream up, especially for women, girls and religious minorities, they really are caught between a rock and a hard place.

But, then, this is the problem that faces people in much of North Africa and the Middle East. They don’t see the situation as a conflict between the good guys (those who serve U.S imperialist ambitions) and the bad guys (those who don’t). They are caught up in struggles by groups who don’t give a damn about workers’ rights, grass roots democracy or people’s self-determination, and who’ll slaughter anyone who gets in their way.

The people in Syria, like those in Iraq and elsewhere in the Middle East, are caught up in a conflict between powerful groups who seek to control the one thing in the Middle East that is just as vital as oil: water. In a region where water is a precious commodity, the real power brokers are those who control the region’s major rivers. It’s no coincidence that all of the countries where the imperialist powers have intervened have been ones which have large rivers. These provide fresh water that is absolutely essential for everything from power generation to irrigating the few areas of arable land in the region. They know that if they control the water in the region they can call the shots.

Western imperialist intervention in the Syrian conflict isn’t motivated by humanitarian considerations. In the 21st Century water and arable land are becoming increasingly valuable as both become scarce, due to climate change and population increases. Syria is the only country in the Middle East – other than Iran – which has large areas of arable land and water that isn’t dominated by the United States. With Russia and other major power-players out of the picture, the consequences of Syria falling to the U.S-supported rebels will be the even stronger influence it will give the U.S. imperialists and their allies, over the Middle East. They will potentially be able to dictate to every local government how to conduct themselves, by threatening to restrict or stop their water supplies.

Governments in the region have long used water as a powerful weapon. This is best exemplified by the Israeli practice of denying Palestinian farmers on the West Bank access to the majority of water drawn from the Jordan River. This controls the people and punishes communities who do not comply with their wishes. Imperialists know this well, which is why the majority of wars in the Middle East they have fought, have been centred around areas where the majority of water is found. This includes eastern Turkey, Iraq, Syria, Lebanon, Israel/Palestine and Egypt.

Perhaps the more appropriate slogan for opposing the war in Syria should be “NO BLOOD FOR WATER”. No matter which power-seeking faction ultimately succeeds in grabbing control, there’s no prizes for guessing who the losers will be: the long-suffering working people of Syria.