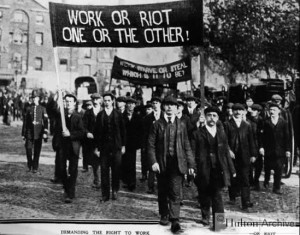 On July 15th, 2013, changes came into force as part of the National-led government’s welfare reforms. Among other alterations, three benefits – Job Support, Sole Parent and Supported Living – have replaced the other main benefits. Parents are now required to enrol their children in early childhood education or else they will lose their benefits. The government is also requiring widows, working age grandparents looking after younger children and most of the disabled to look for employment. These ideas are not new, having already failed when they were introduced in the United Kingdom, where the job market had no use for these potential employees.

The Ministry of Social Development (MSD) is always willing to tell us their job training programmes have a success rate of over 90%. It’s easy to produce that result, when the only people who qualify for them are those who are easy to employ when they complete the course. In practice, this means taking on people who have some knowledge or skill in the field they are training in. In short, those who most need the training will never get on the courses.

It is interesting to note that the MSD tends to site the Privacy Act to silence journalists who try to get a breakdown of the so-called “successes”. That’s because the MSD knows that most of the job trainees don’t get jobs. They just go onto other courses. We know this is the case because nearly all of the job training and welfare programmes used by the MSD have been modelled on what the British Department of Work and Pensions (DWP) have devised. Unfortunately for the MSD it is now clear the programmes devised by the DWP to reduce welfare dependency have not only failed to provide adequate training to those who need it but the people who do the courses are no better off than the people who don’t do the courses. (The Guardian, Work Programme staff struggle to help unemployed when ‘jobs aren’t there’, May 21st, 2013, goes into much greater detail on this. Click on this link http://www.guardian.co.uk/society/2013/may/20/work-programme-staff-struggle-jobs .)

Another reason why job training courses are not working was revealed by a recent study that came out of the United States. This was conducted by Rand Ghayad and William Dickens from Northwestern University. They sent out 4800 fake resumes to 600 job openings of which 3600 were of unemployed people where the key differences were industry experience, length of time in which the jobs were done and the length of time of unemployment. The resumes were of males of similar backgrounds with names that were not easily identifiable by race. The result even caught the researchers by surprise: those who were unemployed for more than six months weren’t contacted REGARDLESS of skills, experience or qualifications. The fact is, employers don’t care about your training. What they care about is how long you’ve been unemployed. (For more information check the article “The Terrifying Reality of Unemployment” in The Atlantic, April 13, 2013. Click on this link http://www.theatlantic.com/business/archive/2013/04/the-terrifying-reality-of-long-term-unemployment/274957/ )

Of course some long-term unemployed do get jobs but very few get them through advertised jobs or through recruitment agencies and employment consultants. They usually get them through friends and family who either hire them or who let them know about opportunities in the job market. The problem often faced by the unemployed is that friends and the social networks established via employment, are usually the first things to be lost once a person has been out of work for more than a few months. Thus, the advice given at WINZ seminars to use social networks in job hunting is only practical within the first few months of unemployment. Telling the long-term unemployed to do the same is laughable at best.

Most of the long-term unemployed aren’t coming off the statistics because they’re getting jobs. It’s either because they’ve had a breakdown and gone onto another benefit, emigrated to Australia or have ceased to be counted as unemployed because they got work for a couple of hours a week. It most definitely isn’t because doing a job training programme gave them the skills and experience they needed to get the work.

The welfare reforms that came into force on July 15th were based on the belief that most beneficiaries, especially the long term unemployed, are lazy, dishonest and cheats who are addicted to the “drug” of welfare dependency. The actual reason why the long-term unemployed are on welfare is because no one wants them.

This is a situation that neither capitalism nor the state is willing to acknowledge. This is because it is easier to blame the long-term unemployed for their situation. Public opinion can be mobilised against them through hate campaigns waged by radio talkback hosts, conveniently released sensationalist stories of benefit fraud in the media and bogus debates like the recent one on TV3’s show The Vote. The latter raised the issue of whether it was parenting or poverty that caused child poverty. The debate was skewed however, by only lobbyists and senior public servants being invited to speak. No one who was actually one of the poor was invited to take part on the panel or asked for their input.

When the senior health advisor of the MSD, David Bratt, compared welfare beneficiaries to drug addicts and welfare dependency to a drug addiction he basically summed up the attitude of a sizeable number of people in New Zealand. Those who see the long-term unemployed and most beneficiaries as lazy, dishonest and vile and who will do anything to maintain their welfare “addiction”. If we think about that comparison we should all be very worried. It is slipping into the language used by the Nazis to describe the Jews and others they deemed to be life unworthy of life. The Nazis referred to the disabled, homosexuals, prostitutes, Gypsies, Jews and even the unemployed as a cancer or vermin that had to be removed from society to protect that society from disease or death. And we know how that unfolded. True, New Zealand in 2013 is a long way removed from Germany in 1933. All the same, the rhetoric of the government and its functionaries makes a heartless disregard for others an easier option to adopt by everyone else in society.

The government is right about one thing. The only medium term solution to welfare dependency is paid employment. However, the reality is that most employers will not hire long-term unemployed or other beneficiaries and, even if they do get work, their wages are usually so inadequate they’re depending on state handouts provided by the Working For Families programme to provide for themselves and their families.

What we need isn’t more beneficiary bashing or failed programmes to deal with long-term unemployment. We need the removal of a socio-economic system that causes the creation of long-term unemployment in the first place. That won’t come through making submissions, signing petitions and ticking pieces of paper every few years. Since governments’ copy each other in implementing many policies, a limited national response won’t be enough either. Removing and replacing the system will only come through the establishment of a new transnational social order based on treating people with basic human dignity. A social order called anarchism.